What makes a great boss?

Emma reflects on International Boss’s Day and what it means to be a boss.

My first real boss was when I started at Rambutan. Before that, I’d only worked part-time as a waitress, so I didn’t know what a true boss was like. I started contemplating what others believe a boss should be, so I asked a few members of the bunch what their thoughts were.

My first question was ‘What does ‘boss’ mean to you at Rambutan?’

Craig answered, “At Rambutan, ‘boss’ is used as a tongue-in-cheek term. We believe that a boss is there to support, develop and challenge you. Boss chats are for a check-in about you, your world, and what you need and require. It’s dedicated time for the individual and built very much on being genuinely interested in each other, empowerment and trust.”

Ellie added, “When I first started a Rambutan, I remember reading that my boss will be my champion and sounding board, who I can go to for advice. It was great to know that someone would be there for support and to work through things together whilst I found my feet. I’ve discovered that my boss doesn’t always give me the answers; instead, they use a style of mentoring and coaching.”

I agree with both Ellie and Craig. I often check in with my boss on a personal level. When I’ve been struggling outside of work, it’s great to have someone who I can talk to and who is genuinely interested. They also help me keep on track with my development and push me to do things outside of my comfort zone.

I then chatted to Bijal, who said, “I think the way a boss is at Rambutan can be quite scary (initially) when coming from a traditional line management background. It makes me recall when I was a line manager in a previous role. I found it difficult not to be a typical ‘boss’, but instead empower my team (which ultimately made any issues I was having go away). The concept can be scary until you attempt it and realise it isn’t scary at all to trust and empower.”

My second question was ‘What do you want from a boss now, compared to five years ago?’

Bijal responded, “Five years ago, I wanted someone to hold my hand and be a comfort blanket. I sat opposite my boss, so I was asking them questions that I actually knew the answer to. When I moved to a different desk, it was the push I needed to realise I didn’t need her validation. I’d been sticking in my comfort zone when I really needed to make decisions for myself.” Craig added, “The important thing is a safe environment where you feel brave enough to make your own decisions and be daring.”

Ellie’s point of view was a little different, as, like me, she’d only experienced one part-time role before Rambutan (in retail whilst studying for her A-Levels). Ellie answered, “I’ve been empowered, pushed and challenged if I asked questions, as my bosses knew that I already had the answers. My boss did this to develop trust in my instincts; I just needed some support and time to talk it through. I’ve loved the opportunities to develop and learn new things and my bosses have helped me to succeed.”

Chatting with our team has made me consider how prior bosses influence the way we may behave in the future. So, my next question was, ‘If you became a boss tomorrow, how would you approach it?’

Ellie stated, “I think for me, the most important thing would be to build a relationship with my people/team. I’d want them to feel open and comfortable to share stuff with me, whether that’s work or home life, so I can be their support within work.” Craig agreed with this, “I think the relationship is crucial. The foundation of any great boss relationship is creating an open, honest and trusting environment. I’m genuinely interested in them.”

I agree with what they’ve said. When I become a boss, I’d focus on building a relationship with my team. I’d want them to feel they could talk to me, whether it be an issue about work or their personal lives. I’d also want them to feel comfortable with both receiving feedback and giving it to me. As a first-time boss, I’d want to know if I did anything ‘incorrectly’, so I could continue to improve.

I ended with one last question, ‘What do you believe are the greatest qualities for a boss to possess?’

Bijal started with a bit of self-reflection, “As we’ve been talking, I’ve been thinking back to the times when I was a line manager. It’s made me realise, I was being a little too controlling and directing, rather than taking a step back and looking at the outcome. I was focused more on how they were executing the task, rather than the end goal. Giving people freedom and trusting them is an important quality. A boss also needs to be human. I think I was too task focused and forgot I was working with a person.” Ellie added, “I agree. I believe the best qualities for a boss are, to be honest, open and approachable.”

What qualities do you think make a great boss? 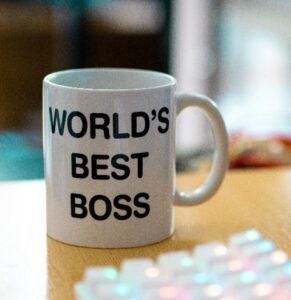